Wednesday’s U.S. presidential debate sparked a lot of conversation, especially on social media, where Twitter users tweeted 10.3 million times over the course of the debate.  The Globe and Mail called the debate “a major moment for social media” – however the debate also helped to highlight certain organizations’ reaction time and social media marketing savvy. 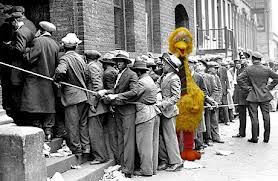 One of the debate’s most talked about moments was when U.S. presidential candidate Mitt Romney  said “I’m sorry Jim, I’m gonna stop the subsidy to PBS,” [to debate moderator Jim Lehrer, the executive editor for PBS NewsHour] “I like PBS. I love Big Bird. I actually like you, too. But I’m not gonna keep on spending money on things to borrow money from China to pay for it.” The social media reaction to Romney’s dig at the beloved PBS children’s program was quick, with many users creating their own unemployed Big Bird memes. What was brilliant is how PBS leveraged the opportunity to generate support for itself. PBS, in turn, sponsored a tweet for whenever a user searched for Twitter activity related to Big Bird. In addition, their social media team had also tweeted a funny tweet from Big Bird himself poking fun at the what was said during the debate. 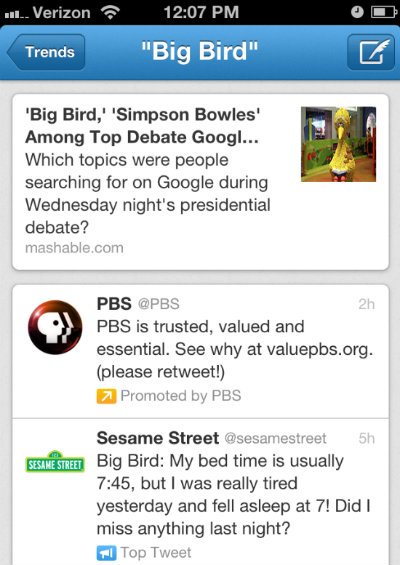 While this sponsorship occurred on Twitter, it’s  important for marketers to be able to quickly leverage various marketing tactics when such an opportunity comes up.  Leveraging search engines on social media sites and traditional search engines is a key way of spreading awareness when people are actively looking to learn more about a topic. On October 4th, there were 50,000+ searches in the U.S. on ‘PBS’ alone according to Google Trends.

However you feel about Big Bird or Mitt Romney, one thing is for sure, a sharp and quick-reacting marketing team is critical in the digital age.